We single-handedly tanked a 10-year renewal of an exclusive beverage contract between Coca-Cola and the City of Miami Beach that would have put an additional 25 million single-use plastic bottles (400,000 pounds) onto our beaches while leaving taxpayers to fund the cleanup and waste removal. Our lobbying of elected officials and direct engagement with PepsiCo led to a new contract that was 100% aluminum for all soda and water products, brought millions of dollars of revenue to the City coffers, AND placed the burden of capturing the infinitely recyclable (and valuable) aluminum onto the manufacturer.

Click READ MORE for the details and video stories: 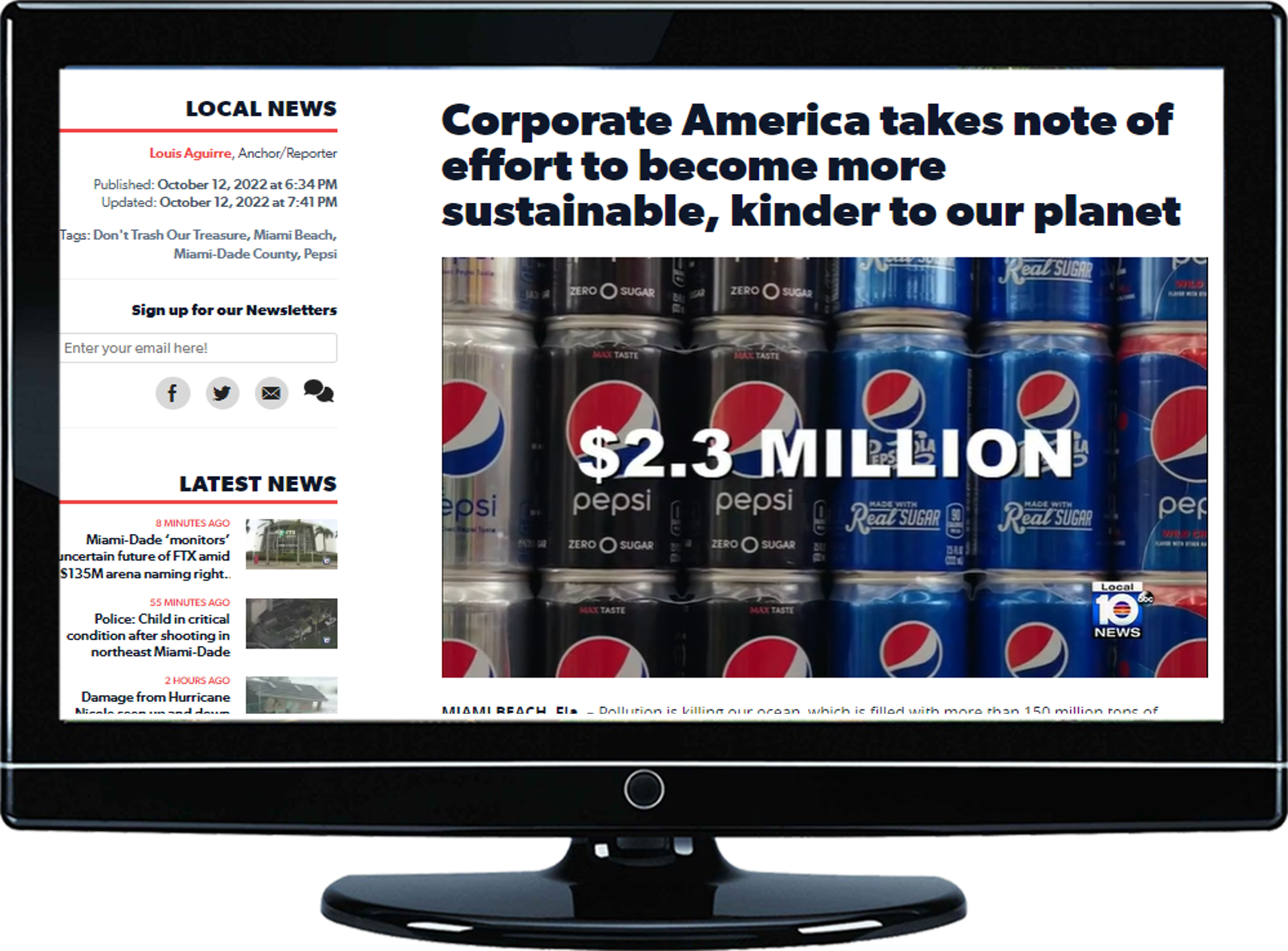 Miami Beach has wonderful outdoor and public spaces that bring millions of visitors to our beaches, convention center, and cultural facilities. And these guests are thirsty all year round. In 2012, the City of Miami Beach signed an exclusive beverage pouring contract with Coca-Cola which required all city-owned venues, special events, and vendors operating on city property to purchase all non-alcoholic beverages from an established price list. It is a lucrative deal for everyone involved, and Miami Beach is a marque account for any manufacturer. In 2015, as Dave sat as Chair of the City of Miami Beach Sustainability Committee, he asked the City and Coca-Cola to add aluminum versions of their products onto the price list so venues like the Miami Beach Bandshell could achieve their plastic reduction and sustainability goals. This fell on deaf ears, so I marked my calendar for 2021 to engage at the Contract renewal time. In 2021, the Sustainability Committee made a list of suggested 'requirements' that the City should ask for at contract renewal, and I even had a meeting with the Coca-Cola team to share what was happening here on the ground with single-use plastics, but they thought greenwashing recycling as the solution would be enough. Unfortunately, cheap single-use plastic is just too integral a part of Coca-Cola's business model.

I received word that the Contract was basically going to just be a renewal of the current contract, and that was completely unacceptable to me. I downloaded the Coca-Cola presentation and offers from our City's public meeting notice website, printed it out, made comments highlighting all the flaws of the proposal, and set meetings with the Mayor and commissioners. I clearly demonstrated to each of them how this contract worth 25 million single-use plastic bottles didn't fit with our City's sustainability goals and was counter to the Mayor's #PlasticFreeMB business incentive campaign. One by one, they agreed. Commissioner David Richardson told staff and Coca-Cola that he wouldn't vote for any contract that had plastic, and the Mayor and other commissioners signed onto the same concept. The current contract no longer had the votes to succeed, and staff was asked to go renegotiate a contract that considered the total value to the city, not just the money - and it had to be plastic-free. Coca-Cola wasn't willing (or was unable), but PepsiCo leaned in and embraced the idea - winning the final proposal which presented tremendous value for our city.

Other communities, sports facilities, universities and airports have the same type of exclusive beverage contracts, so you can help replicate this where you live.!. If you want a deep dive into the nuances, drop me an email to [email protected]

Channel 10 did multiple segments as the advocacy which set a new direction in favor of PepsiCo’s stated Sustainability Goals. If anyone wants to get into the nuances and how to replicate this in your community, contact [email protected]

Video 2) Miami Beach breaks up with Coke over plastic bottles, goes with Pepsi